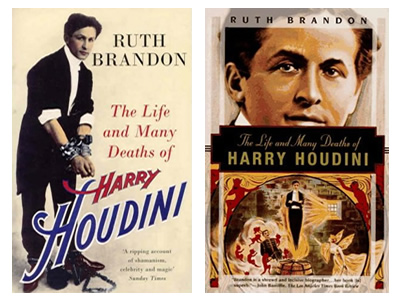 When Harry Houdini died in 1926, he was one of the most famous men in the world. Starting out as a vaudeville magician, he soon began to specialize in the escapes for which his name remains a byword. This book reveals the secrets of Houdini’s most celebrated escapes; more importantly, it looks at the fascinating questions raised by Houdini’s life. Why should a person become a mythic figure just because he burst out of handcuffs? What is the relation between stage magic and ‘real’ magic? What, exactly, was Houdini trying to escape from? The answers reveal a man far more extraordinary than any of his audience could have imagined.

‘A ripping account of shamanism, celebrity and magic … Brandon has chosen a fascinating subject and written a book that rises to it superbly well … She is modestly emphatic in describing her book as biography, but it is several other things besides. It is a study of popular entertainment at a crucial moment in its history. It is an enquiry into the mechanics of stardom and the complex relationship between public and celebrity. It is an original piece of criticism of a brand of entertainment that has seldom been accorded serious attention. Above all … a compelling account of a peculiar life.’ – Sunday Times

‘Brandon is a shrewd and incisive biographer – her book [is] superb.’ – John Banville, Los Angeles Times