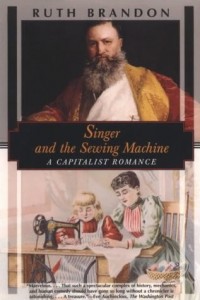 The sewing machine was invented, or so he claimed, by Isaac Merritt Singer. In 1905 and 1906, long after his death, his eldest son, William Singer, retailed what he knew of Isaac’s life in a series of letters to his half-sister Winnaretta, by then Princesse de Polignac. Being thirty-one years older than Winnaretta, William had had considerably more acquaintance with their father. He was, however, rather reticent. ‘It would deeply interest you to know all his wonderfull and very unusual history, but it better not be on paper. When we meet I will tell you if you wish,’ he wrote.

So begins the story of Isaac Singer and his wonderful sewing machine, his several wives, many mistresses and twenty-four children. Beginning on the semi-wild frontier of upstate New York, Singer’s story ends in a Torquay palace, taking in en route his canary-yellow coach with nursery compartment and orchestra, the invention of hire purchase and interchangeable parts, high(ish) life in New York and Paris, and Isadora Duncan …

‘Marvelous … That such a spectacular complex of history, mechanics, and human comedy should have gone so long without a chronicler is astonishing … A treasure’ – Eve Auchincloss, Washington Post

‘Thanks to Ruth Brandon’s brilliant book, surely the best by far to be written … about any capitalist enterpreneur or his enterprises, [Singer’s] wonderful history is on paper at last.’ Alistair Forbes, Spectator