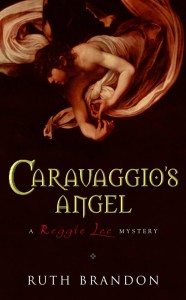 Dr Reggie Lee, newly arrived at the National Gallery, is putting together a small exhibition around three Caravaggios depicting ‘St Cecilia and the Angel.’ One is at the Getty, one at the Louvre, and she hopes it won’t be too hard to track down the third. But a series of inexplicable obstacles keep getting in her way – and then, unexpectedly, a fourth Caravaggio turns up. One of them must be a fake. But which? When people start to die, it seems clear that someone doesn’t want Reggie’s show to go ahead. Why, she can’t imagine. But her career is at stake, and she’d damned if she’ll let herself be intimidated and bullied by these unseen forces. So Reggie investigates and her research takes her from Surrealist suicides to shady Italian art dealers, from seventeenth-century painting techniques to modern French politics in a viciously-fought Presidential election year. By the end it seems as though nobody in the opaque and ill-defined world of art can really stay incorruptible – perhaps not even Reggie herself.